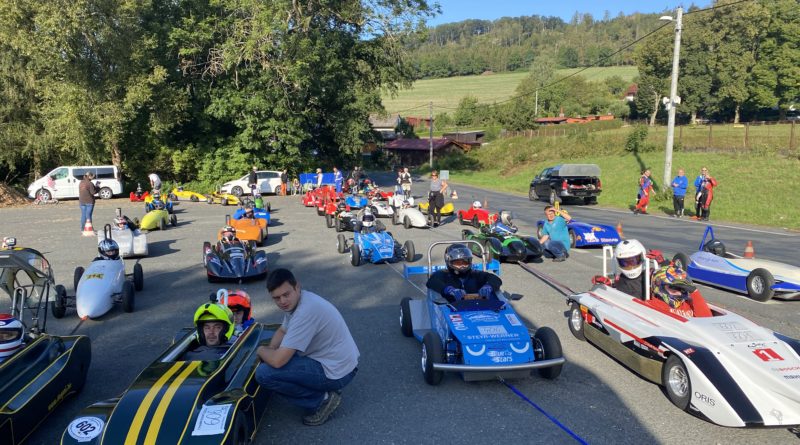 Road closure on April 18 for a test run in the Somsdorf district.

“Actually, it has been called that for a long time, but I only became aware of it when we presented our host application at a conference in France,” said initiator Thomas Käfer. “After we were awarded the contract, we can now hold the event in Freital this July. The opening of the EM will take place on Friday evening in the Hains leisure center, the participants will walk there from the paddock – a parade of nations ”. “We are happy that we have been promised a double patronage from our Prime Minister Michael Kretschmer MdL and our Lord Mayor Uwe Rumberg, nothing can really go wrong.”

Since the organization of such an event is beyond the scope of the team from the “Heimatverein ‘G-Haus’ Kleinnaundorf eV”, Käfer tries to get all Freital associations and citizens on board – 100 helpers are needed as marshals – after all, the race lives on volunteer work. “I would like to thank our counterpart, the EIBE e.V. in Somsdorf, for the past and future support of the EM, which has not been taken for granted”, Käfer continued.

The regulations of the “39. European Championship “provides for early tests on and on the track. In addition, on Sunday, April 18, the race track for individual traffic will be opened. Participants of the EM are not allowed to test the track before the race, therefore drivers of the people’s race “100 Years of Freital”, which also takes place as part of the EM, will test the track on the test day. Measuring devices, cell phones or even agreements between the helpers must work so that the race days in summer can also be started at 30-second intervals without any problems. The SpeedDown racing cars have a Formula 1 chassis and can reach speeds of up to 120 km / h – for safety reasons everything has to fit!

It is possible that even the Lord Mayor Uwe Rumberg will take part in the people’s race in a soap box. “I can already imagine participating as a driver of a racing car, after all, I once learned to be a car mechanic and I know how to handle such a part. In any case, I am already looking forward to attending the event. After all, we are celebrating our 100th anniversary this year and the European Championship will definitely be a highlight, ”said Uwe Rumberg.

“Even if we don’t have to pay any wages, our costs for the event are still 200,000 euros, of which we only have around a third due to the Corona crisis,” Käfer continued. We are all the more pleased to have two strong partners from the region on board again with the Feldschlößchen brewery and Lichtenauer Mineralquellen GmbH. “It is important for us to be able to give something back to the citizens of the region with the support of the event. We see ourselves here as a local partner. Volunteers who firmly believe in their goal at the moment and do everything in their power to achieve it with their commitment deserve our support, ”says Uwe Tschuschke from Feldschlößchen AG. Anja Rambow von Lichtenauer takes the same line: “It is important for us to show those involved with our support that we continue to believe in them and that we can only survive and overcome the current phase together.”

“In the end we are all in the same boat – even if it will be a racing car for us,” said Käfer in conclusion.